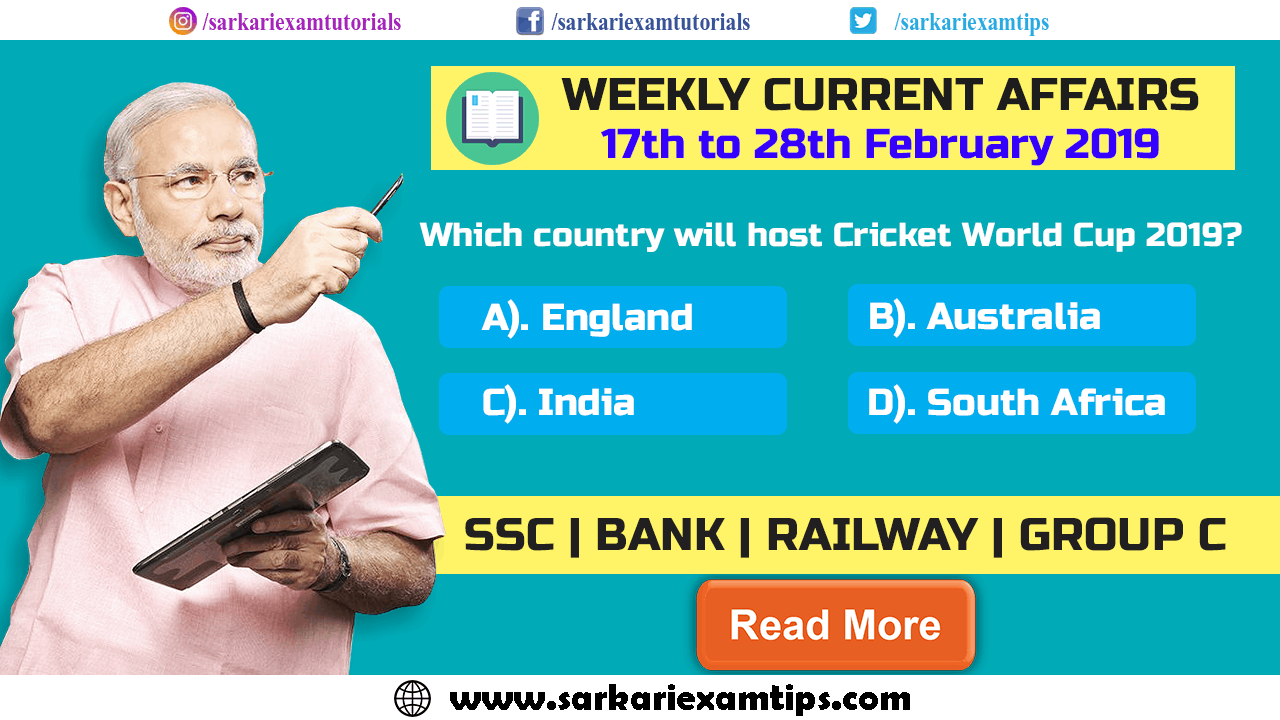 Here are the weekly current affairs from 17th Feb to 28th Feb 2019. These are important for all latest govt exams like Railway, Banking, SSC etc.

Que. What is the Pan-India Number for Women Safety launched by Home Minister Rajnath Singh and Minister for Women and Child Development Maneka Gandhi?
Ans. 112

Que. A tele-law mobile application, which was launched by the Law Minister Ravi Shankar Prasad.
Ans. ‘Nyaya Bandhu’
* The application will benefit 73,000 paralegal volunteers (PLVs) of National Legal Service Authority and State Legal Services Authorities (SLSA) in the country who will be associated under Tele-Law service.

Que. ‘KALIA Chhatra Bruti’ scholarship for the children of farmers benefited under the KALIA scheme was launched by the Odisha Chief Minister Naveen Patnaik in ______________
Ans. Bhubaneshwar, Odisha.
* It aims at providing financial assistance for technical and professional education to farmers’ children by creating a provision for the State government to bear all expenses involved in various levels of education.

Que. A regional conference on ‘Deendayal Disabled Rehabilitation Scheme (DDRS)’ was organized in ________
Ans. Kolkata, West Bengal.
* DDRS is a scheme implemented by the Department of Empowerment of Persons with Disabilities Ministry of Social Justice & Empowerment.
* DDRS was established in 1999 by the Government of India. It is a central government scheme.

Que. Heeralal Samariya, Secretary, Ministry of Labour and Employment inaugurated the three days Conference on the VISION ZERO and its relevance to Occupational Safety and Health was held in ___________
Ans. Mumbai.

Que. The 4th India-ASEAN Expo and Summit started in ____________
Ans. New Delhi.
* This is a flagship event of Department of Commerce, being organized with FICCI to carry forward the momentum and to further strengthen India-ASEAN relations under the Act-East Policy.

Que. Prime Minister Narendra Modi dedicated a new National War Memorial in
Ans.India Gate complex in New Delhi
* The National War Memorial, spread over 40 acres in the India Gate complex behind the canopy, is dedicated to soldiers killed during the Indo-China War in 1962, Indo-Pak Wars in 1947, 1965 and 1971, Indian Peace Keeping Force Operations in Sri Lanka and in the Kargil Conflict in 1999, and also those in the UN peacekeeping missions.

Que. Name the scheme launched by Madhya Pradesh Chief Minister Kamal Nath that guarantees 100 days of employment every year to urban youth from economically weaker sections.
Ans. ‘Mukhyamantri Yuva Swabhiman Yojana’
* Under the scheme, Rs 4,000 stipend per month during 100 days period, would be given to the youth and they will also be given skill development training in order to become independent. (Only those youths, whose family’s annual income is less than Rs 2 lakh and who are in the age group of 21-30 years, are eligible for the scheme).

Que. The Passport Index of 2019: India’s Rank according to the UNDP HDI index?
Ans. 67
* UAE has topped the index.

Que. India has ranked ___________ in the overall ‘Inclusive Internet Index 2019’
Ans. 47th
* It was prepared by the Economist Intelligence Unit (EIU) for Facebook.
* Sweden has topped the chart

Que. The 16th edition of BioAsia 2019 Asia’s largest biotechnology and life-sciences forum was held in ___________
Ans. Hyderabad, Telangana
* It was inaugurated by the Governor of Telangana “E.S.L Narasimhan”
* The theme of the conference was ‘Life Sciences 4.0 – Disrupt the Disruption’

Que. The theme of ‘Aviation Conclave 2019’ Organised By Civil Aviation Ministry
Ans. Flying for all

Que. Which has Became the First US Bank With Cryptocurrency
Ans. JP Morgan
* The currency is designed to be decentralized so that no one has control over transactions being sent over the network.

Que. Iran’s President Hassan Rouhani unveiled the first Iranian made semi-heavy submarine named _________
Ans. ‘Fateh’ (‘Conqueror’ in Persian)
* It has subsurface-to-surface missiles with a range of about 2,000 km (1,250 miles) and is capable of reaching Israel and U.S. military bases in the region.

Que. A month-long ‘Festival of India’ began in _____________, to familiarise the new generation of the country about the similarities between the two countries.
Ans. In Kathmandu, Nepal
* Minister for Culture, Tourism and Civil Aviation Rabindra Adhikari and Indian Ambassador to Nepal Manjeev Singh Puri jointly inaugurated the event.th its robotic arm and is equipped with 5 night-vision cameras to relay the scenario underneath.

Que. Name the World’s Largest Bee which was Spotted for the First Time Since 1981?
Ans. Wallace’s giant bee (Wallace Bee)
* The largest bee knew on the Earth which was considered to be extinct since 1981 was re-spotted in an Indonesian forest.
* Scientists spotted a female bee of the species Megachile pluto and its size is four times the size of the typical European honeybee and has a wingspan of 2.5 inches.

Que. Which Non-Muslim Country has been invited to the OIC conference for 1st Time in Abu Dhabi?
Ans. India
* This is the first time that a leader of the non-Muslim country
* External Affairs Minister Mrs. Sushma Swaraj will be the Guest of Honour and address the inaugural plenary of the 46th Session of the Council of Foreign Ministers of OIC on the 1st and 2nd of March.

Que. Who has been awarded the First Ever Football Ratna Award?
Ans. Sunil Chhetri
* All-time leading scorer for India in international football, has been conferred the first ever Football Ratna honor by Football Delhi, the association governing the sport in Delhi.
* He is popularly known as Captain Fantastic. He has scored the 2nd highest number of goals in international matches among active players after Cristiano Ronaldo.

Que. Who has recently wins the International Human Rights Prize?
Ans. A Sudanese refugee, Abdul Aziz Muhamat
* He spent 5 years in the Australian detention centre on Manus Island in Papua New Guinea, was given the Martin Ennals Award 2019 in Geneva, Switzerland, for exposing “the very cruel asylum seeker policy of the Australian Government”.

Que. Who has been appointed as Controller And ASG For Programme Planning, Budget, and  Finance by United Nation?
Ans. Chandramouli Ramanathan

Que. Who has been appointed as The Head Of AIBA (International Boxing Association) Elite Foundation
Ans. Ajay Singh, president of the Boxing Federation of India

Que. The Supreme Court appointed a retired judge of the court Justice D.K. Jain as the first _______________
Ans. BCCI (Board of Control for Cricket in India) Ombudsman

Que. Recently India Boosts Customs Duty To 200% On Goods Imported From which Country?
Ans. Pakistan
* India with immediate effect has boosted the Customs Duty on all the goods imported from Pakistan to 200% followed by the day after India repealed Most Favoured Nation (MFN) status from Pakistan.
* This 200% tariff rate is higher than the average bound rate of 113.5% for agriculture products and 34.6% for non-agriculture products. The MFN applied rates are 32.8% and 10.7%, respectively for farm and non-farm products.

Que. Government Relaxes Angel Tax Norms For Start-ups From 7 Years To _______________
Ans. 10 Years
* The Ministry of Commerce and Industry in an attempt to provide relief to and boost investments into start-ups in India has decided to simplify the process for them to get exemptions under the Income Tax Act, 1961.

Que. Reserve Bank of India has signed a Bilateral Swap Arrangement (BSA) with whom?
Ans. Bank of Japan

Que. Which team in Indian Domestic Cricket history after Bombay and Karnataka to defend their Irani cup titles?
Ans.Vidarbha

Que. Which country will host Cricket World Cup 2019?
Ans. England and Wales from 30th May till 14th July.

Que. Which Country Becomes 1st Ever Asian Team To Win Test Series In South Africa?
Ans. Sri Lanka
* Only Australia and England have defeated South Africa in a Test series at home.

Que. Who has been awarded the Lifetime Achievement award at ‘Federation of Motor Sports Clubs of India’ Annual Awards function?
Ans. R. Karthikeyan
* R. Karthikeyan is the father of India’s first Formula One driver Narain Karthikeyan

Que. Infosys Unveils A Learning App For Engineering Students called as __________
Ans. ‘InfyTQ’
* InfyTQ is a free platform available on both mobile and desktop, featured with always-on, anytime, anywhere learning catered through a continuous transfer of digital skills.

Que. The First Walking Robot To have navigational capabilities without GPS or mapping?
Ans. AntBot
* It has been designed by Centre for Scientific Research (CNRS) and Aix-Marseille University researchers at ISM, on lines similar to desert ants who use polarised lights and UV radiation to navigate in space.
* Weighing only 2.3 kg, this robot has six feet for increased mobility, allowing it to move in complex environments, precisely where deploying wheeled robots and drones can be complicated.

Que. Bandicoot, a drainage-cleaning robot, has been introduced for the first time in _____________
Ans. Chennai, Tamil Nadu.
* It is a semi-automatic robot can enter manholes for cleaning sewage lines with its robotic arm and is equipped with 5 night-vision cameras to relay the scenario underneath.

Que. International Mother Language Day has been observed every year on ___________
Ans. 21st February
* Celebrated Since February 2000, To promote linguistic and cultural diversity and multilingualism.
* Theme is “Indigenous languages matter for development, peacebuilding, and reconciliation”.

Que. National Science Day is celebrated across India on ____________
Ans. February 28
*Famous Indian scientist Sir Chandrasekhara Venkata Raman or CV Raman discovered the Raman Effect on this day in 1928. For his discovery, Sir CV Raman was awarded the Nobel Prize in Physics in 1930.